When students learn physics, they learn that they have to play an epistemic game. , Physics students are acutely aware that they have to “play a game” when they are learning physics. The question is: what sort of game do we want them to play? The most essential thing about ISLE is that it presents students with a set of rules for a non-threatening game that helps students build their identities and abilities as practicing scientists.

Why is it so important to create a non-threatening environment to learn physics?

One of the most common instructional approaches to conceptual change in physics is to ask students to predict what they think will happen in a given physical scenario (e.g., “what do you think will happen when I drop these two metal balls, one that is 100g and one that is 500g?”) Many students will say that the heavier ball will fall faster. The instructor then performs the experiment (she drops the two balls and they strike the ground at the same time). Students observe this unexpected result. It is then assumed that students will realize that their physical intuition needs modifying. Students are expected to resolve the contradiction between their expectations and reality, updating the neural paths in their brain to accommodate the new information and the process of learning physics continues.

This model of student cognition has significant problems because it neglects the emotional part of learning. Research shows that students cling tenaciously to their “incorrect” beliefs, using the idea that the heavier ball fell faster even though they are aware of the outcome of the experiment. Recent research has given us some startling insights into why original ideas are hard to change: People ignore or block out data when it threatens their identity or sense of self. In a recent study, people were shown to be more receptive to factual information that contradicted their world view if they first wrote an essay about a self-selected core value and recalled a time when that value made them feel good about themselves, before the contentious information was presented to them. (Nyhan & Reifler, submitted) If you doubt that “elicit, confront, resolve” model of learning physics is threatening to students’ sense of self and identity, take a look at the following quotation from a physics student:

“I have the attitude that I should just believe what they [physics teachers] tell me…the things I see in physics are completely different than what I would normally expect them to be…Even though I’ve seen it in lab, I say “OK, I’m just going to pretend it’s true,” and I work the problems like that…I don’t believe what I’m seeing. I think if I took more classes, and I saw it more often, I wouldn’t have to play that game, where I pretend that’s right. But that’s what I do right now…It [the game] seems like there are these strange and crazy things going on out there, things that don’t make any sense.” (ref. 3, p.216)

If a physics class is making you question your intuition and/or your confidence in your perception of reality, it is almost certainly striking at the core of your sense of self.

Knowledge is more than facts

Knowledge is a combination of two components: The facts, and the system of rules why which those facts are established. These two components are inseparable from each other. In traditional instruction, while instructors may pay attention to how the physics knowledge is established, it does not “rub off” on students. Here are examples of responses from traditionally taught students who “know” Newton’s third law as identified by their ability to answer the four Newton’s third law questions on the force concept inventory correctly. Students were asked how they knew that Newton’s third law was true:

In contrast, here are the responses of a group of physics students who took their physics in the ISLE format. They were asked “If someone came to you and asked you: ‘How do you know Newton’s third law is true?’ How would you answer them?”

ISLE students achieve this level of epistemological sophistication because they are fully engaged in a process of creating their own physics knowledge by implementing the same reasoning processes that practicing physicists use to create their knowledge. In other words, ISLE physics students learn physics by learning and engaging in the actual process of knowledge creation, by thinking like a physicist.

ISLE is a game that models the process by which physicists create their knowledge. The key to what makes it non-threatening is that it is like a mystery investigation. That is why we always introduce ISLE with the “ten TVs” activity. Students construct physics concepts and develop science process abilities emulating the processes that physicists use to construct knowledge. The steps of the ISLE cycle proceed as follows: 1. Students come upon some interesting physical phenomenon that needs explaining. 2. Students gather data about the phenomenon, identify interesting patterns and come up with multiple mechanistic explanations for why the phenomenon is happening. We say “come up with any crazy idea that could explain this” because we DO NOT want students to feel deeply emotionally attached to their ideas. 3. They then test their explanations by conducting one or more testing experiments. The primary goal is to eliminate explanations rather than “prove” them. This is key to the non-threatening nature of the process. In ISLE, “predicting” means saying what would be the outcome of the testing experiment if a particular hypothesis were true. Ideas that are not eliminated are kept and re-tested with further experimentation. Finally students apply the ideas they have established to solve real-world problems. 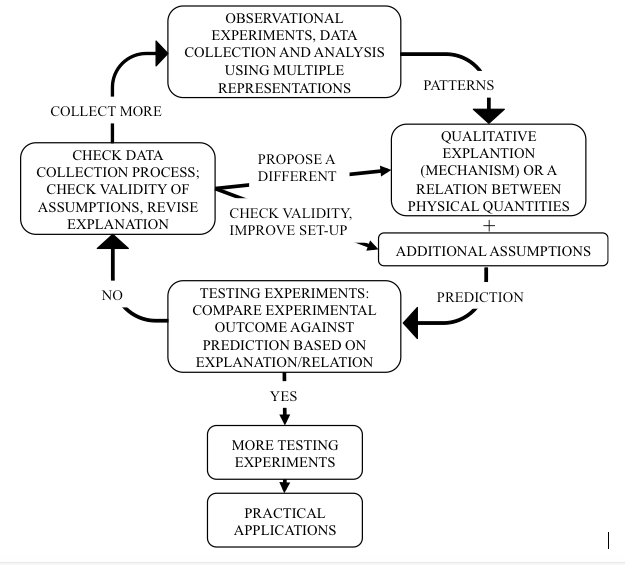 WHY FOCUS ON PRACTICING SCIENCE WHILE LEARNING PHYSICS?

Below is a survey of 21st century learning goals for high school and STEM graduates. How can we design our physics courses so that they are more aligned with these goals?

Studies about the Desired Outcomes of 21st Century Science, Engineering and Technology Education

What knowledge and what abilities are needed to succeed in this 21st century workplace? This question has been addressed by individual research studies examining the need for various process abilities and for declarative knowledge of people in that workplace. , , , Duggan and Gott studied the science used by employees in five science-based industries: a chemical plant specializing in cosmetics and pharmaceuticals, a biotechnology firm specializing in medical diagnostic kits, an environmental analysis lab, an engineering company manufacturing pumps for the petrochemical industry, and an arable farm. They found that most of the scientific conceptual understanding used by employees was learned on the job, and not in high school or university courses. They concluded: “A secure knowledge of procedural understanding appeared to be critical.”9 Aikenhead summarized his own and other studies as follows: “In science-rich workplaces, procedural knowledge had a greater credence than declarative knowledge (Chin et al.4), and employees consistently used concepts of evidence in their work to such an extent that Duggan and Gott9 concluded: “procedural knowledge generally, and concepts of evidence specifically, lie at the heart of … science-based occupations.” In addition to individual research studies like these, there have been a plethora of national studies and reports concerning desired outcomes of science education.

“It is important to assist students to learn not only science facts but, just as important, the methods and processes of research, what scientists and engineers do, how to make informed judgments about technical matters, and how to communicate the work in teams to solve complex problems.”

“…all students learn these subjects by direct experience with the methods and processes of inquiry.”

“…there is no disagreement that every student should be presented an opportunity to understand what science is, and is not, and to be involved in some way in scientific inquiry, not just “hands-on” experience.”

“Research … suggests that working in groups in a cooperative setting produces greater growth in achievement than straining for relative gains in a competitive environment.”

“Also very important is the observation made by many, particularly employers, that a well-designed, active learning environment assists in the development of other skills and traits they seek in employees: cognitive skills (problem solving, decision-making, learning how to learn), social skills (communications and teamwork), and positive personal traits (adaptability and flexibility, openness to new ideas, empathy for ideas of others, innovative and entrepreneurial outlook, and a strong work ethic). This point has been made repeatedly in testimony at our hearings and in published studies and reports.”

Section VII of the report contained a list of suggestions for SME&T faculty concerning teaching and learning. We provide below four of the ten items in that list.

The next generation science standards for K-12 science classrooms identify three dimensions of science proficiency: Scientific practices, cross-cutting concepts, and disciplinary core ideas. The accompanying NRC report introduces the dimension of scientific practices with the following sentence. “From its inception, one of the principal goals of science education has been to cultivate students’ scientific habits of mind, develop their capability to engage in scientific inquiry, and teach them how to reason in a scientific context .” The report identifies 8 key scientific practices: